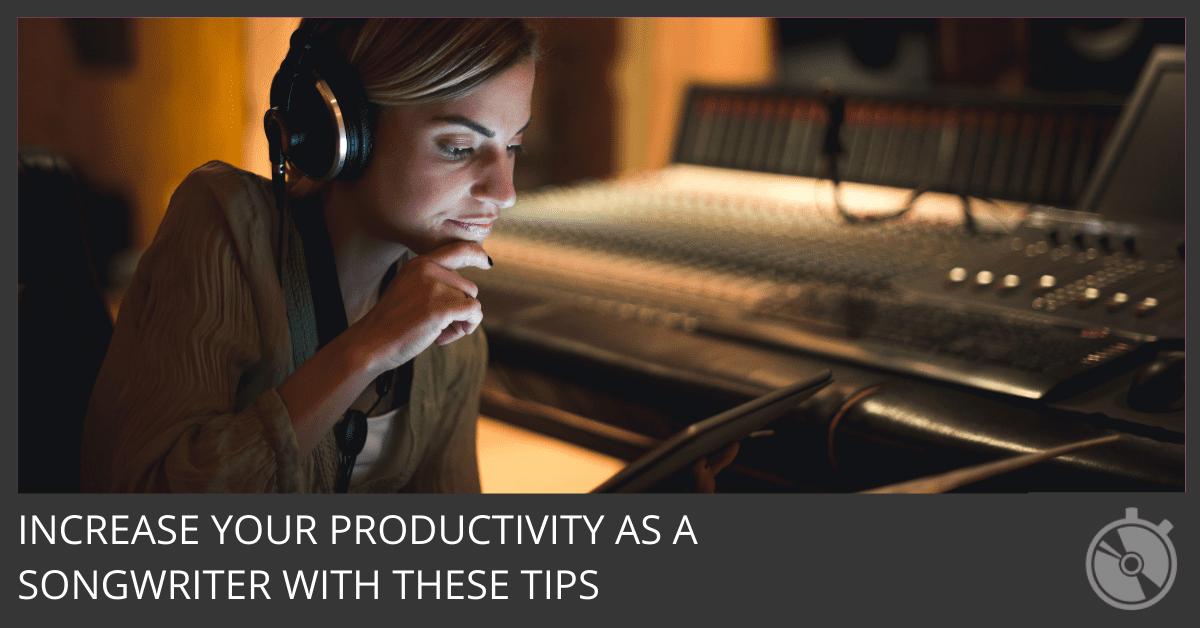 Few things in life are as frustrating as watching someone with potential fail to reach their goals because they don’t have the simple songwriting habits that keep a steady pace. This is just as true for songwriters as it is for any other pursuit. In order to get better at writing songs, you need to write more songs, and the best way to do that is by maintaining a consistent pace.

When you write more songs, you learn what works and what doesn’t work for you as a writer. You can experiment with different styles until something clicks. You become aware of how your creative process works so that you can improve upon it. The most significant things about your creative process happen without you even realizing them, so the faster you write songs, the faster you can improve.

Perfectionism is the enemy of creativity and the pursuit of quality is a given, so the bottleneck to progress is the speed of output

This isn’t to say that there is no merit to working on a single song for an extended period of time. Sometimes an idea will come along and you need time to let it ferment and grow, but this doesn’t need to happen very often. Most ideas are fleeting and they’ll disappear if you don’t quickly put them into action.

There’s also something to be said for spending more time polishing a couple of songs rather than spending less time perfecting many songs. But again, this only applies if you’ve already established some level of consistent quality in your writing. If not, then it would be more beneficial to crank out more songs.

There’s no reason to make things more difficult on yourself by expecting too much. Songwriters should understand how important it is to keep the creative momentum going so that their output remains steady over time. Peaks and valleys are part of the journey. A steady pace is a fast pace, even when it seems slow.

Not in a capitalistic way that desires peak productivity, fame, and fortune but an artistic way that values making music for experiences

Listen, there’s nothing wrong with having a career as a musician. I’ve had to have day jobs as I was finding my place, but I’ve been making a living as a musician for decades now! I’ve had easy times, and I’ve had rough times. But I know that after playing with some of the most famous musicians and some of the great musicians you’ll never know, I can say that fame isn’t all it’s cracked up to be, and fortune is in the eye of the beholder.

Instead of trying to change how the world sees you, change how you see the world. Taking control of your creative output is the first step to being rich and famous, and the only step to having a musical experience. Maintain a steady pace in songwriting, where all that matters is expression and experience.

You could be stuck in a creative rut and the only way you’ll get out of it is to keep writing songs. Don’t wait for good ideas, just write down bad ideas and they might blossom into something better than what you were expecting. A steady pace in songwriting can go a long way toward making your experiences more productive.

So when you hit that point where it feels like nothing is coming to you, remember that you’ve got the Speed Songwriting System to help you get through the next step. There’s never a reason to be blocked, there’s only the fear that this song won’t be your best. But if you can finish a first draft of the song quickly, then you can finish several drafts of a song in the same time that you might normally write a single song, only to abandon that seed of an idea that could grow into an evergreen tree.

I don’t care if you want to be rich and famous, but I do care that you abandon songs that will lead to better songs. So I give you the system that allowed me to keep writing, through the peaks and the valleys.

I’m not famous and I don’t care to be. But famous people have learned the Speed Songwriting System. Whether they needed it or not, I know there’s a need for speed. And I would still be doing this if I didn’t help people.

So let any negative ideas of “speed” leave you as you welcome the idea of writing better songs faster (even if that means writing bad songs fast!).