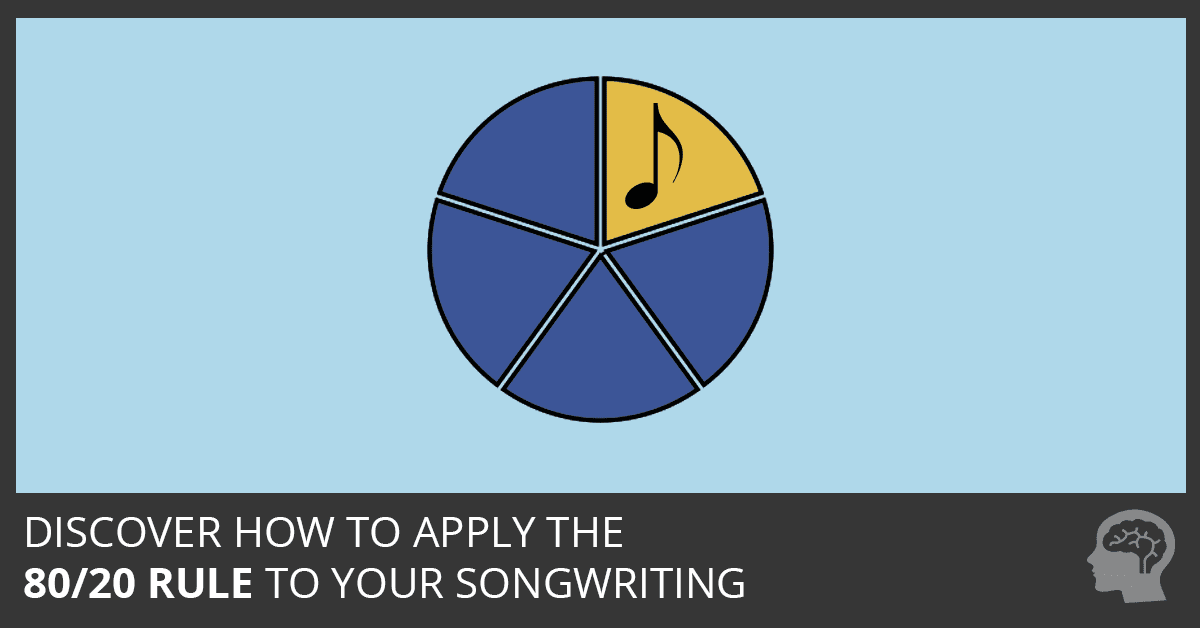 What stops most songwriters from finishing songs isn’t a lack of good ideas but a misdirection of songwriting focus.

Based on the surveys I give to songwriters, musicians spend more time on tasks that do little to move the song closer to completion.

For example, if you just spent 15 minutes on the kick drum sound but don’t have a single completed verse, you’re not really writing a song at all. Likewise, if you just spent half an hour practicing a guitar riff when your chorus needs a melody, you’re another 30 minutes away from actually doing any actual songwriting.

An Italian economist, Vilfredo Pareto, observed that 80% of the income in Italy (and every country he subsequently studied) was received by 20% of the population. Over the years, many noticed that the Pareto Principle, or the 80/20 rule, could be applied to just about everything: 80% of the world’s money is in the hands of 20% of the people, 80% of the nurturing support and satisfaction you receive comes from about 20% of the people you know, 80% of your success comes from 20% of the things you do.

As a musician, you’re self-employed. You don’t get paid for every hour you work. Instead, you are paid on outcomes.

The 80/20 rule applies to you, your career, and your songwriting. By applying more of your time to the 20% of musical activities that make a difference, you have the potential to double your income and double your time off.

How? By identifying the things you do that contribute the most significant value to yourself and your songwriting.

A perfect hint to what should be important to you as a songwriter lies in copyright law. When it comes to a song, what’s essentially protected is the lyrics and the melody. That riff you just wrote is pretty cool, but it’s not in the top 20%. That snare drum you just mixed is slammin’, but is it a priority? It might be if you’re an engineer. But not if you’re a songwriter. And not if you’re mixing a snare that doesn’t yet have a song!

If you apply the 80/20 Rule to your songwriting, you can resolve to spend more of your time doing more of the things that contribute the greatest value to you.

For every 5 minutes you spend on the sound of your demo, spend 5 times that on the lyrics and melody.

The chord progression and the music production might change. But what’s going to get you closer to finishing a song isn’t the snare or guitar. It’s the lyrics and the melody.

I get a lot of demos from people with stellar production and so-so songs. But once in a while, I get a demo that doesn’t sound like it was recorded within 30 light-years of the Record Plant, but the song still stands on its own two feet. That’s the great songwriter.

You can even use the 80/20 rule to figure out what songs you should be working on.

If you’re like most songwriters, you’re working on more than one song at a time…

Or start fresh with the Speed Songwriting System and write a song in an hour.

The point is this…

If you’re having trouble finishing songs, then maybe it’s time to take a good look at where you spend most of your time and make some adjustments.

After all, you would like to double the quantity AND the quality of your songs, wouldn’t you?